Over the past ten months, we’ve seen the pandemic continually hammer home the performing arts, causing thousands of in-person events to be canceled across the country. Without wasting time, major venues in Canada such as the National Arts Center and Koerner Hall in Toronto were among the first to innovate with pivots to live broadcast technology and drive-thru events.

These pivots offered the hope of an industry determined to find a way to provide live music, dance, comedy and theater to customers watching safely from their homes or vehicles.

That hope collapsed on January 12, when the Ontario provincial government announced a review containment legislation which temporarily prohibits filming and musical rehearsals in concert halls across Ontario until at least February 11, 2021. Inexplicably, drive-in and drive-in events have also been put on hold.

Some in the industry were quick to suggest that the amended legislation amounted to a double standard, since the film and recording industry was exempt from it entirely. 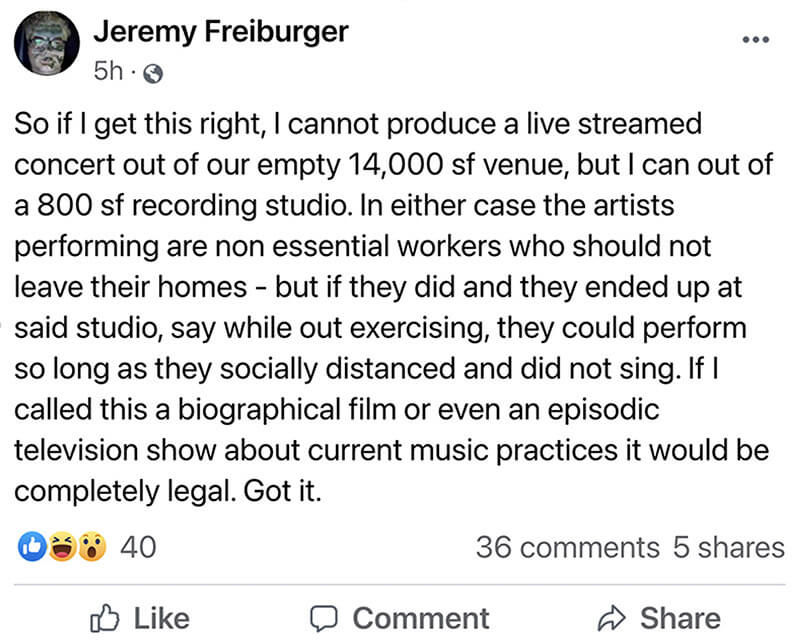 To make matters worse is that places have struggled to decipher the vague wording used in the legislation, especially since the lockdown rules were just revised on December 21 – including the language to ensure that the live broadcast can continue as long as there is no no audience. Even the mayor of Toronto, John Tory, was look for answers.

Considering that one of the benefits of live streaming is that it helps keep people in the home, the rationale for an outright ban is hard to justify – let alone the positive contributions that broadcast events make. direct to people who need the arts more than ever.

Are we all in the same boat?

The full economic impact of the pandemic won’t be known for some time, but early reports show the financial losses to the performing arts have been unprecedented.

Before the pandemic, Statistics Canada data showed that the cultural industry contributed $ 58.9 billion, or $ 1,611 per capita, representing 2.8% of GDP. Live performances were $ 2.8 billion of that. Amid the pandemic, conservative estimates suggest a drop in revenue of 60-90% and an estimated loss of $ 1.7-2.5 billion.

A recent survey from I Lost My Gig Canada (via Hill strategies) revealed a huge economic impact on performing artists and cultural workers. The survey showed that workers lost 83% of their annual income, which, at $ 30,500, was already close to the poverty line. The average number of concerts lost per artist was between 34 and 37. Lost income per artist was estimated at $ 28,400 in Alberta and $ 21,100 in the Atlantic provinces.

Equally alarming has been the impact in the United States. The Brooking Institute reported that the arts sector lost about $ 150 billion in revenue, a total decline of 29%. The sector hardest hit was the performing arts, which lost $ 42.5 billion and about 1.4 million jobs, representing 50 percent of its total workforce.

As forecasters wondered if the economy would suffer a crisis Recovery in W, K or V, the event sector was blocked in the starting gates.

According to a survey released last week by the Canadian Federation of Independent Business (CFIB), more than 181,000 businesses in Canada (one in six) are considering closing their doors as a direct result of the pandemic. Since March, around 58,000 have closed permanently. CFIB predicts that 20% of private sector jobs will be lost over the next 12 months.

“We are not headed in the right direction, and with every week that goes by without any improvement on the business front, more owners are making this final decision,” said Simon Gaudreault, senior director of national research at CFIB. “The more businesses that disappear, the more jobs we will lose and the harder it will be for the economy to recover. “

What does this mean for the places? The CFIB report found that the hospitality and arts sectors have been the hardest hit sectors in the country. The projection is that between 28 and 33% of arts organizations, including venues, will close their doors for good over the next 12 months.

In May, the Canadian government announced $ 500 million in emergency funding for eligible cultural, heritage and sports organizations. The subsidy helped cover the sudden drop in income, but the longer they stay in a waiting pattern, the longer the recovery takes.

The main concern is the severe impact on capital reserves leading to a decline and the potential for a significant drop in customers due to their switch to new forms of entertainment during the pandemic. The result can be an initial rising leg with a slight upward slope that quickly flattens out, resulting in a much dreaded L-shaped trajectory.

All of this is happening while others, especially big tech, are enjoying one of the biggest booms of the decade. Stocks of top performing tech companies (Amazon, Facebook, Google, Apple, and Microsoft) are at all-time highs. Tesla’s Elon Musk is currently in the race with Amazon’s Jeff Bezos to become the world’s first trillionaire. From $ 24.6 billion before COVID, Musk’s net worth has grown by more than $ 150 billion since March 2020. Bezos’ fortune has also continued to grow, but not as rapidly: he reached 182.8 billion dollars compared to 113 billion dollars during the same period.

This suggests that the recovery is asymmetric and heavily dependent on industry.

As we continue to make political decisions, we need to understand that second and third order consequences are involved. As well intentioned as it is, making decisions that effectively legislate on sites without any data to back it up is a good idea. fault.

It has been a year to forget, but it has also been an unforgettable year for new opportunities in the arts. As long as we keep COVID in our sights, the performing arts will return. But now is the time to empower the arts sector to do what it does best and innovate.

I leave you with some timely advice from the great George Bernard Shaw: Without art, the crudeness of reality would make the world unbearable.

Get daily art news straight to your inbox.

Sign up for the Ludwig van Daily – classical music and opera in five minutes or less HERE.

Michael Vincent is editor-in-chief Ludwig Van and CEO of Museland Media. He publishes regularly and writes occasionally. A digital media specialist for over 15 years, he has worked as a senior writer and is a former freelance classical music critic for the Toronto Star. Michael holds a doctorate in music from the University of Toronto.

Michael Vincent is editor-in-chief Ludwig Van and CEO of Museland Media. He publishes regularly and writes occasionally. A digital media specialist for over 15 years, he has worked as a senior writer and is a former freelance classical music critic for the Toronto Star. Michael holds a doctorate in music from the University of Toronto.